There’s just something about Peyton Manning. Whether it’s his adorable seemingly empty brain or his hilarious Papa John’s commercials, he has won America’s hearts forever. That is, at least, until Johnny Manziel takes his rightful place above him after demolishing the touchdown record he just set.  ohnny Manziel forever. It is a great privilege to be seeing possibly the best quarterback of all time play week to week and we should all consider ourselves blessed to see it all unfold. Remember when everyone was saying his career was over? Now, onto less inspiring topics: The Falcons.

One small tear rolls down my cheek as I compose this section.

Or should I say, “Drop City?” Roddy has clearly not been himself lately. He broke the Falcon’s franchise record for touchdowns this week but if happened at a very unfortunate time. Roddy now has 5 dropped passes on the season – good for a drop percentage of 9.1%. This doesn’t seem that bad but when you realize that he is second only to Victor Cruz in that category, you may begin to worry. This team is far too terrible to have a typically sure-handed player like Roddy dropping the ball all the time. Let’s hope the game plan on offense shifts moving forward to having less of an emphasis on the deep ball and more of an emphasis on, short, high-completion percentage routes with only an occasional shot downfield. I think this will help the line by getting the ball out ahead of the pass rush and help our receivers who randomly aren’t catching anything. Simplify and hope for the best.

So Massaquoi was freed this week and he came up big. He was in the backfield quite a bit. For a team that has not been able to touch the quarterback with a 4-foot pole, this is an encouraging sign. The true question is this: Why is he not starting? He has done nothing but impress when given the opportunity and it makes me wonder how competent our coaches actually are. We have an obvious opportunity sitting in front of us to inject energy into our biggest weakness and they just sit back and don’t give him playing time. He must be really bad in practice because his results are much better than any alternative we have.

MATT RYAN IS THE BEST

When all else fails, we know that Matt Ryan is going to do everything he can to get us a victory. He is consistently trying to extend plays even while getting absolutely demolished every other play. It is the beautiful thing about him and it is very unfortunate that through these last two seasons that his skills are being lost and absolutely overshadowed by the faults in the rest of our team. Dimitrioff may have built a roster with no depth but he nailed the Matt Ryan pick without a doubt.

Super Bowl Pick: Broncos vs. Cowboys. The AFC is pretty straight forward, with a couple of toss-up divisions like the AFC North. I could see the Bengals or Ravens ending up winning that one. The NFC, however, is a crapshoot. Notably missing from the playoffs is the Green Bay Packers. Unfortunately, the awful NFC South gets a spot and the best of those terrible teams will end up being the Saints (as much as it kills me to say). In the end though, I am going with the Broncos and the Cowboys for all the marbles as those two teams are the most impressive thus far in the season.

This one made the cut largely because of the powder blues but Antonio makes a sick bobbly grab here in a losing effort.

In what is beginning to make less and less sense, here is Kyle Orton with a pass to the one-yard line that would set up the Bills for the victory with 1 second remaining.

This one earns the number 1 spot because: did you know Ryan Tannehil could do that? Neither did anyone else.

And finally, our bonus gif of the week which may very well be one the best of all time, Peyton’s teammates not giving him his record-breaking ball.

Marquette is ranked 15th in the league with 33 punts. This is, of course, skewed by the bye weeks. However, we are currently on track for 88 punts, well short of the 115 needed to break the record. Marquette needs to kick 8.2 punts per game to accomplish this goal. The Raiders are BAD so my hope remains. Keep your heads up, #KICKSQUAD, we still in this.

It’s time for everyone’s favorite segment: see how wrong John was with his predictions!

Would have been better to go the other way around.

THURSDAY GAME: CHARGERS @ BRONCOS: Last year, the Broncos broke some records while playing the Titans on a Sunday.  Four days later, they lost the Chargers at home on a Thursday night. Sound familiar? Different year, different teams though. The Chargers have become a darling team of mine. The resurgence of Philip Rivers has helped my fantasy team quite a bit and I think that he has the capacity to move this team to bigger and better things. The Broncos are great against the run, but not as good against the pass. The Chargers like to pass and pass they will. The Chargers, on the other hand, are very good at defending the pass. They rank number 3 in passing yards allowed per game and number 5 in total defense. They also have my boy Jeremiah Attaochu on their team (token homerism). I think the Chargers come in and repeat what they did last year to the tune of: Chargers 27, Broncos 21

*not as cool as Maquette King but a close second

GAME OF THE WEEK: EAGLES @ CARDINALS: In a clash of one-loss teams, the high powered Philly offense will take on the beat team in the nation at stopping the run. The Eagles will still be able to do their thing, they just won’t be able to do as much of it. The Cardinals have a healthy Carson Palmer who will light up the Eagles defense. On paper, it seems like the Cardinals will dominate this matchup, but the Philly offense will keep them competitive and pull out the win.  Eagles 20. Cardinals 17 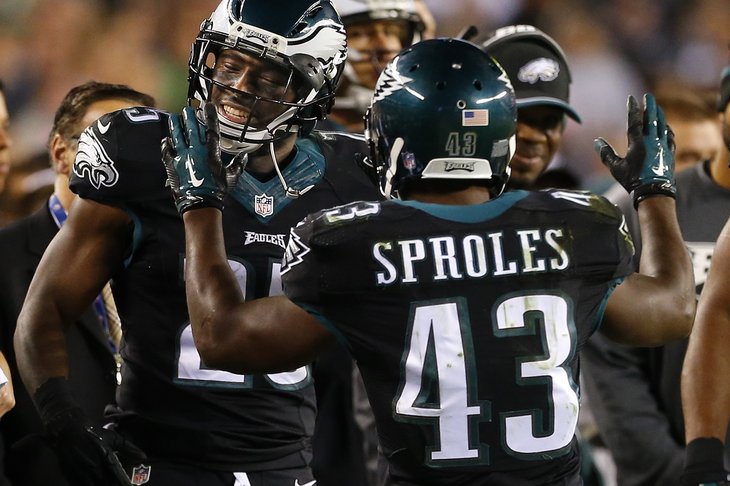 Enjoy this week, especially tonight’s Thursday Night Game. It should be a good one. And Falcon’s fans… the draft isn’t too far away!