College Football Round Up Week 3

Welcome to #GoodContent Week Day 2 people! I hope you enjoyed Brad’s piece about Steve Avery yesterday. And Brandon has an awesome look at the Braves’ bench later today. It all kinda makes me feel self-conscious about whatever the heck this is. Anyway, back to your regularly scheduled mediocrity.

Just as it seemed USC (Non-Spurrier Edition) was ramping up for a playoff bid, a huge setback was dealt to the Sarknado and company by way of Boston College. I am personally really disappointed in this, not because I like USC, but because I was really proud of my nickname for Steve Sarkisian: The Sarknado. I really hope USC (Not the one that has never won a national championship) stays relevant so I can work in Sarknado somehow every week.

Honorable mention: Dak Prescott and Jameon Lewis, Mississippi State – You don’t see too many trick plays any more outside of Boise, Iowa, so when a team manages to pull of one of these relics, it’s extremely fun to watch. Dak throws it to Jameon on what looks to be a normal screen pass. Lewis proceeds to chuck it back to Prescott, who runs it in for a touchdown. The execution and blocking here is brilliant and it makes for a fun and exciting play. Also, Dak Prescott is a great name for a quarterback in the SEC–a conference full of quarterbacks with great nam… wait what is that siren going off for? Does that mean what I think it does? OH YEAH ITS TIME FOR…

Anyway, here is that GIF I promised you.

Honorable Mention: Nameless Arkansas State Hero – This is the worst fake punt in history. The punter throws it to the middle of nowhere and straight into the hands of the defense. But even more hilarious is the random wide receiver who plays dead for no apparent reason. I wish this play had worked so i could see what role he played in all of this and who exactly he was trying to fool with the maneuver? I have so many questions! Just watch.

Winner: Marcus Mariota, Oregon: Marcus Mariota flies into first place in Heisman rankings on this play right here. He scored four touchdowns in this game–two on the ground and two in the air. He also completed 83% of his passes and rushed for 14 yards a carry. Another fantastic week for Mariota and the Ducks.

Honorable Mention: Virginia 23 vs Louisville 21 – Dang, this was an awesome game. And who could have possibly predicted this result? The Cavaliers controlled the game for the first three quarters. Then, Lousiville comes surging back and gains the lead. Hope looked lost for Virginia, whose offense sputtered out on the following drive. But then what can only be described as an act of the football Gods–who delight in torturing Bobby “How does he keep getting hired” Petrino–occurred. James Quick, the returner for Louisville, was bumped by his own player and fumbled the ball away giving Virginia one last shot. They drove down the field and their kicker hit a 42 yard field goal to help put the game away. And Bobby Petrino spirals further down into the perennial sadness that is his life. You would almost feel bad for the guy if he wasn’t such an awful human being. 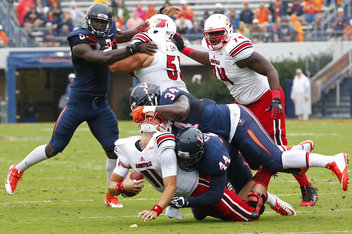 Honorable Mention: Boston College 37 vs USC (Not the Cocks) 31 – Boston College ran all over USC, right after Sarknado made a statement win over Stanford. This is a classic example of team that gets a little too big for its britches then comes out flat against an inferior team. But lets not diminish BC’s accomplishment here. They played a great game and reminded us all why football isn’t played on paper. Boston College quarterback Tyler Murphy put the team on his back and willed them to victory on Saturday night. He had 191 yards on 13 carries for an incredible 14.7 yards per carry. The committee of running backs for the Eagles totaled a massive 452 yards. One of the awesome things about college football is the sheer amount of different ways to win. In the NFL most teams run just about the same offense, until something better comes along. In college, teams run tons of different and weird offenses. A running attack like BC’s wouldn’t fly in the NFL, but in college it’s good enough to beat one of the best teams in the entire nation. Winner: USC (Spurrier’s Cocks) 38 vs UGA 35 – This game was possibly the most entertaining of the season so far. Seriously, this game was won by less than an inch by South Carolina. We got to see two SEC powerhouses battle it out for dominance in a match-up that always seem to be anyone’s game, no matter what their respective rankings are. South Carolina came into this game just trying to stay alive after a week 1 thrashing by Texas A&M, and Georgia came into this game looking to further improve its status and increase its chances of a playoff birth. We got to see two quarterbacks air it out and battle for supremacy the whole game. Hutson Mason for UGA looked better than he did against Clemson, racking up almost 2oo yards and two touchdowns. Dylan Thompson also looked great, putting up 271 yards and posting season highs in yards per attempt and completion percentage. Todd Gurley had 20 carries for 131 yards and a touchdown, which is a good day for a normal running back, but by Todd Gurley standards it was just kind of meh. He is definitely still up there in Heisman conversations though, and if this is what a Gurley off-day looks like, then he is in good shape for the rest of this season. South Carolina may have won the battle today, but the war is far from over. The last two times UGA has lost to USC, the DAWWWWWGS have won the SEC East. Overall, this was another great installment in this relatively new, but fantastic, rivalry. But for now let’s enjoy this picture of the OBC weight lifting.

Honorable Mention: Shaun Wilson RB, Duke – After seeing limited action in his first two games this season, the Blue Devils finally decided to let him run the ball. Little did they know that they let loose a destructive power unlike Kansas had ever seen. In a game some people mistakenly watched believing that college basketball season had come early this year, he put up 245 yards and three touchdowns. Oh and did I mention he only had 12 carries? That’s right he averaged over 20 yards a carry. OVER 20 YARDS A FRICKIN’ CARRY! I have no idea why after three games Duke hasn’t completely redesigned their offense around him. He ripped off huge gain after huge gain with his ridiculous speed. If this kid gets in the open field, watch out because he will run straight by you leaving a trail of destruction and linebacker’s tears in his wake

Honorable Mention: Gunner Kiel QB, Cincinnati – In his season debut, Gunner Kiel lived up to his name, throwing the ball 37 times for 415 yards, six touchdowns, and no interceptions. The gunslinger was invaluable for a Cincinnati team that has a legitimate shot at winning the American Conference this year. His six touchdowns on Saturday tied the school record for most touchdowns thrown in a single game. The transfer from Notre Dame, who was extremely nervous about his first start, exceeded coach Tommy “He’s still around?” Tuberville’s expectations. Of course, this performance has to be taken with a grain of salt because of the defense he played against, but even when adjusting his QBR for the crappy Toledo defense, it is still in the top ten for this week. I cannot wait to see what else he does this year and if he will be able to continue to produce at a high level throughout the season. 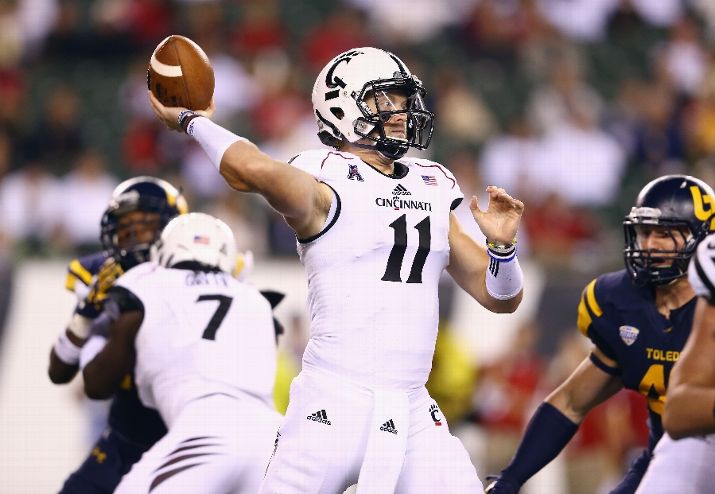 Winner: Clint Tricket QB, West Virginia – West Virginia needed every ounce of Clint Tricket to win this hard fought battle with Maryland, that came down to the final second. He threw for an amazing 511 yards and four touchdowns with a 76% completion rating. This is the most yards by a West Virginia quarterback since Geno Smith’s 656 yard game in 2012. Tricket is showing massive signs of improvement this season and is close to passing his mark of 1605 yards last season, as he sits at 1224 three games into the season. He has been the primary play maker for this Mountaineers offense this season. He kept the game against Alabama close and put up 365 yards on their vaunted defense. Then he helped blow out Towson, putting up 348 yards on their less-than-vaunted defense. And then on Saturday he delivered his best performance yet, keeping West Virginia in the game against Maryland, putting the team on his back, and helping the Mountaineers to win. One can only hope we get to see more of Clint Tricket taking over games this year, because this is a special kid who can be a huge difference maker for this team.

Next week: Two football teams face-off for the right to be called the winner of their match! Who will win? Tune in to find out in hot GIFs and even hotter takes!