College Football Round Up; Week 11

Another week goes by, and we are another week closer to pointless Twitter arguing about who should be in the playoffs, who shouldn’t, and whether or not there is a conspiracy to give all four playoff spots to the SEC. It should be asked, if there actually is an SEC bias, what good is it gonna do to argue with people on Twitter about it? Personally, I don’t even want the best teams to go. I just want teams that are fun to watch play football to go. Unfortunately, I am not on the playoff selection committee. I am not going to give you a playoff prediction, because at this point it is just an exercise in futility. There is still a lot of football to be played, and I have no idea how everything will shake out. Anyway, I’ve now talked too much about serious stuff, so lets take a second and rejoice, because TODD GURLEY COMES BACK THIS WEEK!!!!

Despite my Alma Mater, watching Todd Gurley run while carrying a leather sack of air is one my favorite things. Because I do attend the Georgia Institute of Technology (THWg) this is a guilty pleasure for me. Wait, no, I was just shown this video. SERIOUSLY? He has been gone for four games! This is ridiculous. And they used freaking “Coming Home.” Ugh that is awful, the most stereotypical song they could have picked. That video somehow made me root against one of my favorite players to watch. There is no creativity in sports videos anymore. It’s like the UGA athletics department just searched “return” on Youtube and went to town on some Derrick Rose mix tapes. I’m sick of talking about this. Moving on.

Let’s get into the meat of this article, shall we?

Honorable Mention: Gus Malzhan, Auburn – He cannot believe that fumble that Nick Marshall committed. And he should be incredulous; take a look at this:

Honorable Mention: Maxx Williams, Minnesota – Beautiful execution on this toe drag catch here. Seriously, you can’t do it any better than this:

Winner: Trevone Boykin, TCU – Trevone Boykin apparently picked up the star from Super Mario. This run is ridiculous. I would call it a scamper, but I hate when people call runs “scampers” in football. It just seams a bit demeaning. He bolts up the middle of the field and does a freaking flip into the end zone. It’s no scamper. It’s freaking awesome! Gold Medal at the Olympics status.

Game of the week

As usual, college football brought no shortage of madness this week. A major congratulations to Texas for looking completely competent in a game. That is big. West Virginia pulled the oldest trick in the book: Get a few convincing wins, make people think you are good, and lose to an outranked team. Those little rascals did it again. TCU blew out Kansas State with some fantastic play by Trevone Boykin (see above). It was a miracle that either team overcame the other’s defense in LSU vs Alabama, but Blake Sims sucked less than Anthony Jennings’s 31% passer rating (Ugh, that made me sick). Baylor beat the crap out of Oklahoma for the first time ever in Norman.

Runner up: Ohio State 49 vs Michigan State 37 – So Ohio State is “good” again. Yay. This is so much fun for everyone. Whatever, J.T. Barrett played himself a great game, putting up 300 yards and 3 touchdowns. He has also spawned a quarterback controversy for next season. It will be awesome to watch Braxton Miller sit out his last year while Barrett captains the team. Ohio State deserved to be talked about even after the awful loss to Virginia Tech. They were better than we thought they were. This is a huge blow to Coach Dantonio’s Michigan State team, which had an outside shot at a playoff spot. 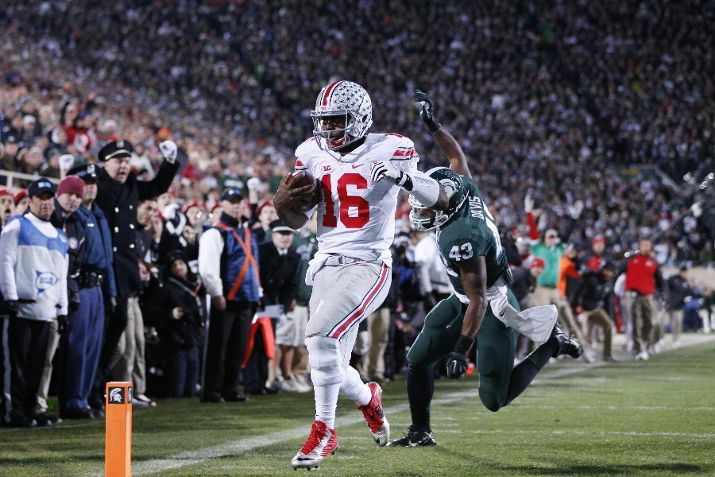 Winner Texas A&M 41 vs Auburn 38 – This was a pitched battle all the way through. Texas A&M flashed that potential we saw in the early season. They got ahead quick and stayed ahead. Auburn tried to keep up and was doing really well until two late game fumbles spelled disaster for Nick Marshall and the Tigers. Kyle Allen took over quarterbacking duties for A&M–in lieu of Kenny Hill–and had a great showing, putting up 277 yards and four touchdowns. A second loss for Auburn probably ends their playoff hopes, because there are so many other deserving teams out there who have one loss or less. Its cool to have variety and to see new faces and new teams compete for the championship, but I’ll miss Auburn and their fun no-huddle zone-read offense. SEC football isn’t normally inventive or fun on offense, but Auburn somehow managed to do that. (Don’t beleive me? Ask Mike Bobo the Offensive Coordinator for the Dawgs) Malzhan is the anti-Saban. 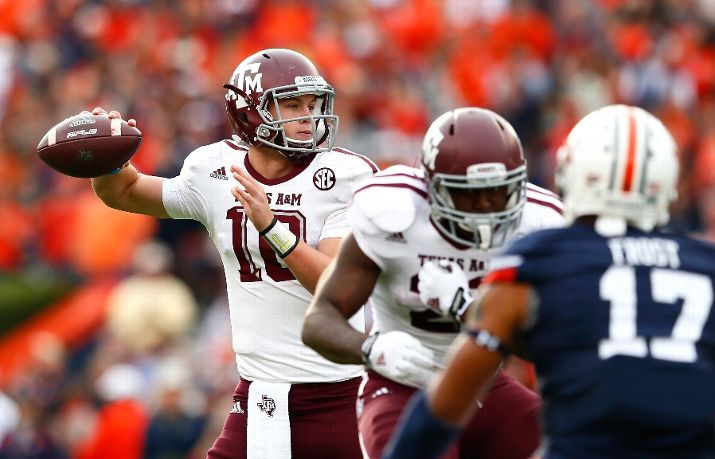 Winner: Trevone Boykin, QB TCU – This has to be Boykin here. Many others played good games, but none put their team on their backs like Boykin did. He threw for 219 yards on 68% passing and accounted for all but one of the touchdowns during this game. Taking away extra points and assuming he accounted for half of the touchdowns he threw, he accounted for 51% of all points scored for TCU. Talk about putting the team on your back doe. Also, he rushed for 123 yards on 17 carries, thus averaging 7 yards a carry. Boykin put TCU in the playoff picture here with a big win over yet another top 10 team. F/+ is a metric that accounts for efficiency and production of the offense, defense, and special teams. According to this useful little tool TCU is currently number 7 in the country. This is close to their true rank, but the playoffs are determined by people, not formulas. We’ll have to see how ranked wins, strength of schedule, and head to head match ups play into the committee’s decisions before we can make an educated guess as to whether TCU is “in” or not.

Have a good week arguing for your favorite team on Twitter! And see you back here next week for more fun, GIFs, and occasional analysis!